Our fathers were veterans of  WWII, so we baby boomers had toy guns. While others played “War” in the dense woods nearby, we played “Library.”

Diane lived 2 doors down. She was the youngest of her family, and was surrounded by books.

On a sunny day, we took plastic shelves out onto her back patio, filled them with books and games, and set up shop.

We made library cards, enrolling the interested neighbors, mostly ourselves.

Index cards were used to identify each item, a rolling rubber date stamp marked the card at “check out”.

Most of the books came back in the very same day. We charged for late returns, maybe a penny.

At the end of the day, or when rain clouds appeared, we dismantled the whole operation.

It seems we never considered moving indoors, or maybe her parents did not allow for that. I guess we were bookworms who appreciated fresh air and sunshine.

It lasted most of the summer, but only for that one year. Some developed muscle tone, and joined in the ongoing softball game in the next yard. I did not, but was dragged into the game by an older sister who was charged with including me.

My interest in words, books, libraries never really ended. The local public library remained a quiet refuge for me until high school.

I had the opportunity to explore some of the best ones on the east coast; the New York Public Library, the Free Library of Philadelphia, and the largest of all in terms of volume, the Congressional Library in Washington DC.

The one on my bucket list is the Clementinum in Prague, Czech Republic.

There are images of beautiful structures, amazing painting and sculpture in libraries all over the world, but none surpasses this one for me. 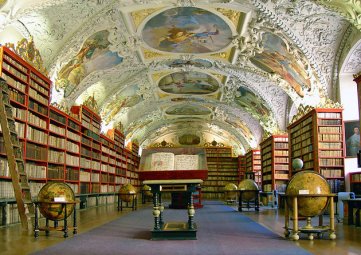 Named for a chapel dedicated to St. Clement in the 11th century, it dates back to a Dominican monastery, a Jesuit college, and was established as an observatory, library and university by Empress Maria Theresa of Austria in 1773. With its Baroque architecture, and oil-painted ceiling, it remains as the Czech National Library. 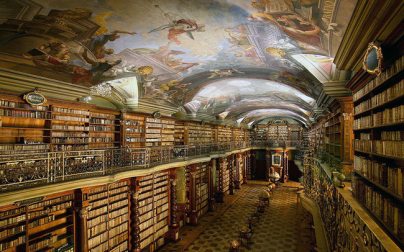