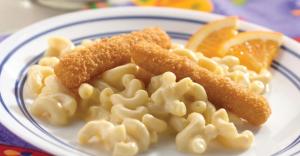 Fish sticks, macaroni and cheese, with a side of stewed tomatoes.

It was the meal of choice on Fridays in families who adhered to the Catholic tradition of meat abstinence.

Where did this practice originate ?

The information is not very clear.

Many believe it is a carry-over from Old Testament fasting traditions. Most people cite Christian teachings of the Apostles, who mandated sacrifice in memory of the crucifixion on Good Friday.

Reinforced in the Middle Ages, it was sometimes attributed to a particular Pope who was an advocate for the struggling fishing industry.

The original intent was to ban all meat-derived food products, including cheese, butter and eggs. The 40 day denial during Lent may have led to the abundance of Easter eggs, the food celebrated as the ban was lifted.

Historically, meat has been expensive, a luxury for those who could afford it; giving it up one day a week was an acceptable sacrifice. Some scholars referred to denying pleasures of the flesh; citing the high zinc content of meat and its effect on libido.

In the late 20th century, the Catholic Church softened its restrictions to meat abstinence only on Fridays during Lent.

In 1962, the owner of a McDonald’s franchise in Ohio created a sandwich to boost struggling Friday sales. The Filet-o-Fish was tested there, became a huge success, and soon went national.

Friday fish fry events have been very popular in certain parts of the country. Fast food restaurants seem to engage in fish sandwich wars every year during Lent.

As for the title of this piece, it is comforting to know that it is okay to eat alligator on Friday.

“The alligator is part of the fish family.”

So said Archbishop Gregory Aymond of New Orleans, Louisiana in 2010. As such, it is permissible for Catholics to consume this and other cold blooded reptiles, amphibians, and creatures of the water.

Just thought you should know.

*** Repost inspired by a recent report of this massive alligator with his “catch of the day” casually crossing a Florida golf cart path. 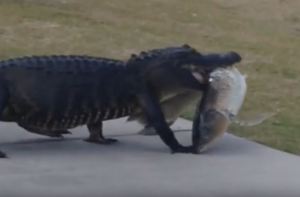 124 Responses to Alligator on Fridays